The Top 15 Free Things To Do In Tokyo

Tokyo is one of the most expensive cities in the world for locals and travelers alike with prices on hotels, restaurants, and shopping as sky-high as the Tokyo Sky Tree. It might surprise you to learn that you can enjoy dozens of free things to do in Tokyo, from scenic spots overflowing with Japan's famous cherry blossoms, to ancient temples and even beer tastings. As your adding up your per-day budget of how to spend your yen, these no-cost activities are sure to soften the blow.

You probably associate ultra-modern Tokyo with skyscrapers, video game arcades, and millions of neon signs, but the city's Asakusa ward conceals an ancient sacred site. Originally built during the seventh century, Senso-ji temple is one of Tokyo's most famous attractions, whether you photograph its vermillion pagoda against a bright blue sky or peer through the dozens of shops along the street leading to it.

It's also free to get a bird's-eye view of Senso-ji. Simply enter the Asakusa Tourist Information Center and take the elevator to the seventh floor. This open-air observation deck not only lets you look down on Senso-ji, but also offers an unobstructed shot of the nearby Tokyo Sky Tree, one of the tallest free-standing structures in the world. 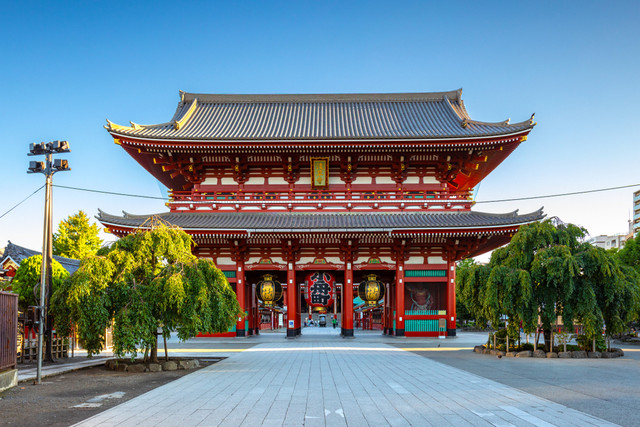 It's been more than 15 years since Gwen Stefani was the queen of the pop charts, but one of her lasting cultural impacts was popularizing Tokyo's "Harajuku Girls" to an American audience. Long infamous among the Japanese and throughout Asia for their outlandish "Gothic Lolita"-style fashion, these iconic Tokyoites are a free Tokyo tourist attraction unto themselves.

Although they're more dispersed throughout Tokyo these days, one of the best places to see the girls remains Harajuku's own Takeshita Street, a wild and colorful thoroughfare that extends eastward from JR Harajuku Station. A hub for Tokyo's youth (even those who don't wear turquoise wigs or crazy costumes), Takeshita Street is a feast for the eyes and the stomach with culinary specialties like decadent sweet crepes and cotton candy bigger than your head. 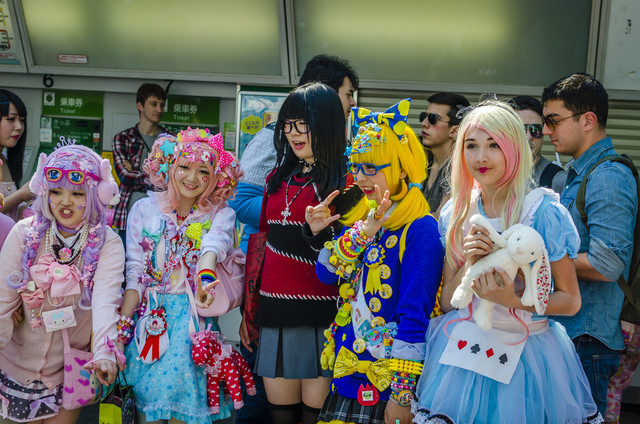 3. Say Your Prayers At Meiji Shrine

After finishing up at Takeshita Street, cross over to JR Harajuku Station, but don't board a train. Instead, make the short walk to nearby Meiji Shrine, an oasis of calm in the heart of busy Harajuku. From the moment you stroll under the towering, wooden torii gate to the point where you arrive at the shrine's main building, which was built in 1920 but somehow feels older, this is one of the best free things to do in Tokyo—one of the best things to do in Tokyo, period.

Tip: Unlike temples, shrines in Japan, which are known in Japanese as "taisha," are always free. And they're always open 24 hours, which means you could theoretically come here after a night out on the town in Harajuku or nearby Shibuya. 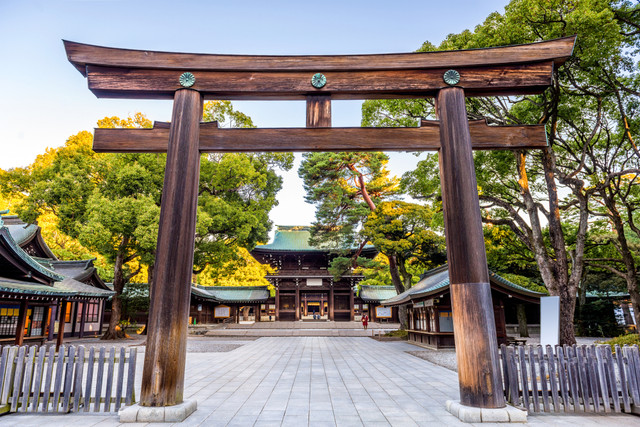 If you travel to Japan during cherry blossom season, it's tempting to think you need to leave Tokyo behind immediately, and head for more rural destinations. In fact, several incredible hanami spots exist in Tokyo—and many of them are free. Among the most picturesque is Chidorigafuchi, a moat that runs just to the north of the Tokyo Imperial Palace (spoiler alert: This place is also free to enter!).

Note that if you want to get the so-called "money shot" of the sakura-lined moat from the north, you won't need to pay. However, if you want to row a boat underneath the pink-and-white blossom billows, you'll need to pony up some yen (and wait in a very long line as well!). 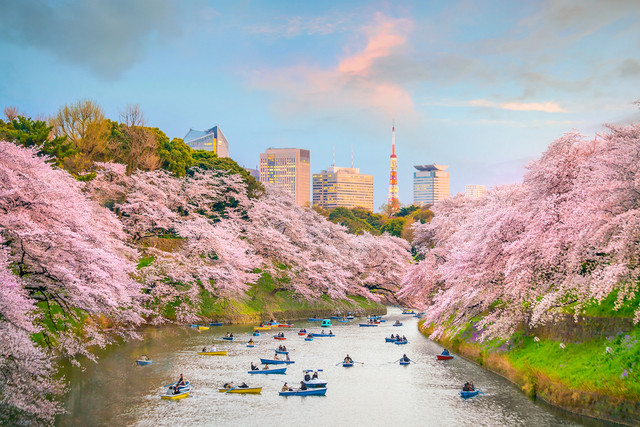 5. Watch A Sumo Practice In Ryogoku

Watching a match of a Japanese sumo tournament, which takes place throughout the year not only in Tokyo, but also in Osaka and Fukuoka, is a truly thrilling experience. It's also expensive, and you have to book well in advance. One hack, if you happen to be visiting outside of Japan's scheduled sumo tournaments, is to watch a practice in Ryogoku, Tokyo's de-facto sumo ward.

This is a free thing to do in Tokyo, but there are some complications. You'll usually need to call the "stable" the day before to confirm that the practice is taking place. Additionally, due to overcrowding, many stables (such as Arashio, which you or your hotel can reach at +81-3-3666-7646) require tourists to watch through glass, so as not to distract the wrestlers. 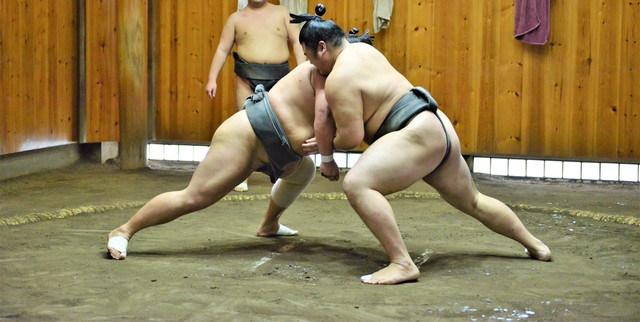 6. Visit The Statue Of Liberty

China is more famous for fakes than its neighbor Japan, but Tokyo has a legendary one: A replica of the Statue of Liberty on Odaiba island. To get here, ride the driverless Yurikamome train to Daiba station, from whose exit you can't miss it.

Lady Liberty's fake sister, which looks particularly stunning (or maybe crazy) with the Tokyo skyline and Rainbow Bridge lit up behind her after dark, is one of many amazing things to do in Odaiba. 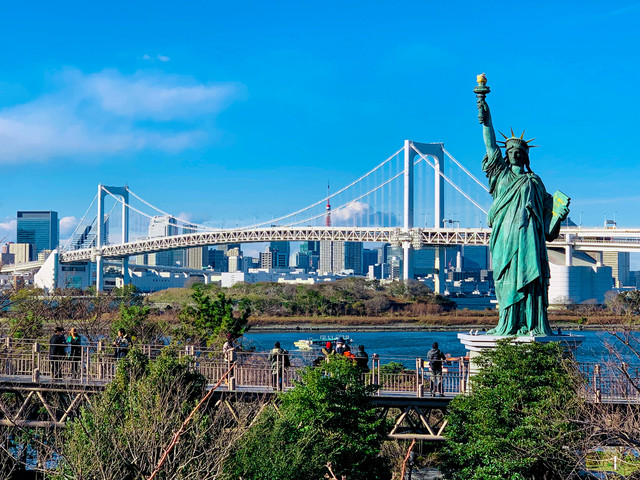 The bad news? Tokyo's famous Tsukiji Market, home to some of the freshest sushi in the world, is no longer where the city's tuna auctions (among the most expensive in the world) take place. The good news? In the lead-up to the 2020 Olympic Games, the local government has re-located the auction to the purpose-built Toyosu Market, which can accommodate even more travelers and offers better views than Tsukiji's inner market did.

Despite the huge costs Tokyo and Japan have accrued in building the new market and infrastructure to get to it, the auction remains free. You simply have to arrive to Toyosu somewhere between 3 and 4 a.m., as there's a daily quota for how many tourists are allowed in. Note that while the driverless Yurikamome train runs to Odaiba island (where Toyosu Market is located) during the day time, prospective auction watchers need to take a taxi to get there at that time—and that's definitely not free or cheap! 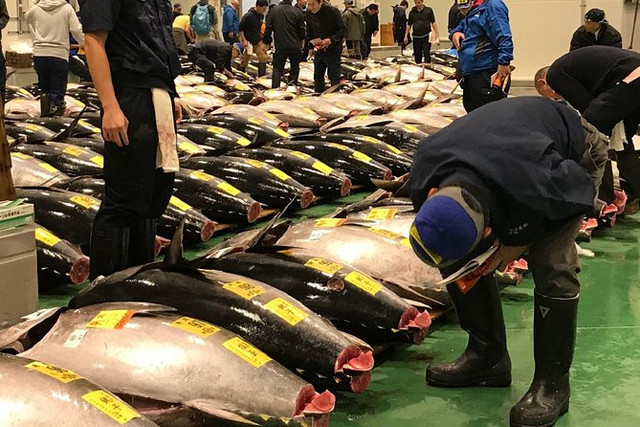 8. See A Panorama Of Tokyo Station

Another old structure in the heart of modern Tokyo is Tokyo Station, whose early 20th-century facade stands in stark contrast to the skyscrapers of Maranouchi that rise around it. If you can't afford a stay at the luxurious Tokyo Station Hotel, which occupies most of the original station building, there's a cheaper (actually free) way to appreciate this timeless piece of heritage architecture.

Simply head southward from the main station entrance, and go inside Kitte, a shopping mall that is itself housed in a historical building, the former headquarters of the Japan Post. Ascend to the free observation deck, where you can admire the old brick building and watch futuristic Shinkansen bullet trains speed away toward points all over Japan.

9. Stroll Down Ginkgo Avenue In Autumn

For most of the year, Meiji Jingu Gaien is a beautiful if nondescript boulevard. But during the Japanese autumn, which arrives in Tokyo from late November to early December, the ginkgo trees that line Meiji Jingu Gaien blaze a beautiful golden color, which becomes one of the most photographed spots in all of Japan.

This isn't shocking, of course, given that a stroll down Meiji Jingu Gaien is one of the top free things to do in Tokyo. Consider coming during the week (or if you visit during the weekend, early in the morning) to avoid the crowds that are almost as numerous here as fallen yellow ginkgo leaves. 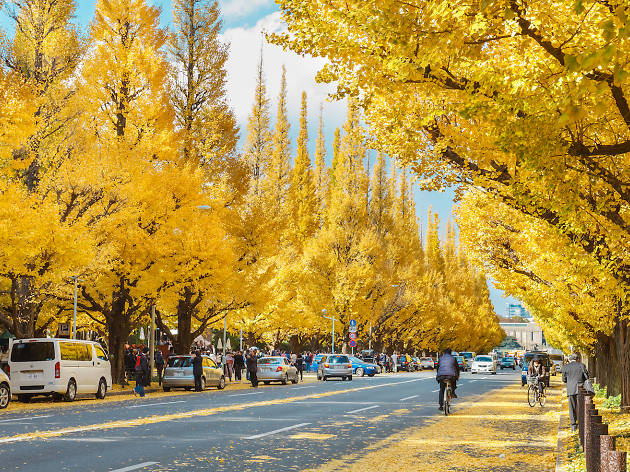 What's better than a day filled with free things to do in Tokyo? Some free Japanese beer to take a break from all the exploring, of course. To enjoy this beer and the brewery tour that comes with it, travel to the Suntory Musashino Brewery, which sits about 30 minutes west of Tokyo Station near Fuchuhommachi Station

Although there is officially a limit the amount of beer attendees can drink, staff are known to be generous with the tasting, which takes place at the end. Don't go too wild, however, because there are still several more free things in Tokyo for you to do! 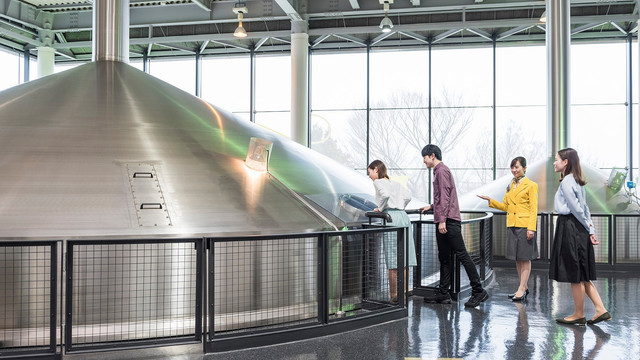 Tokyo is not only about the contrast between ancient and modern, but between sacred and silly. A classic example of this is Gotoku-ji, a temple in suburban-ish Setagaya ward, which is decorated with no less than 10,000 figurines depicting maneki-neko, a.k.a. the Japanese beckoning cat.

In spite of achieving relative fame on social media, Gotoku-ji is rarely crowded, largely because it's around 30 minutes from central Tokyo by train. With this being said, you can maximize your chances for an even more private viewing by visiting this quirkiest of free things to do in Tokyo during the week. 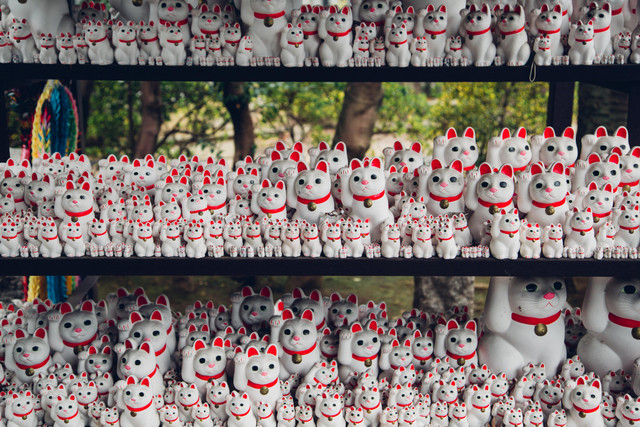 12. Watch The Sunset Behind Mt. Fuji

Observation decks are a dime a dozen in skyscraper-filled Tokyo, though they're not all created equal. For one, only a few of them are among the free things to do in Tokyo. The most popular one of these is the Shinjuku Metropolitan Government Building (which is also home to a cafe where you can enjoy a slightly less obstructed view of Tokyo's skyline—with an extra payment, naturally).

Avoid both the crowds of the Shinjuku Metropolitan Government Building and the adjacent skyscrapers, which obscure views of Mt. Fuji. Instead, ride the JR Chuo-Sobu Line (which is free if you have a Japan Rail Pass) to Chiba prefecture's Ichikawa Station, and ascend to the 45th floor of the nearby i-Link Tower. On a clear day, you'll not only see Tokyo's entire skyline sprawled out beneath you, but also Mt. Fuji (which is especially beautiful at sunset time) towering overhead. 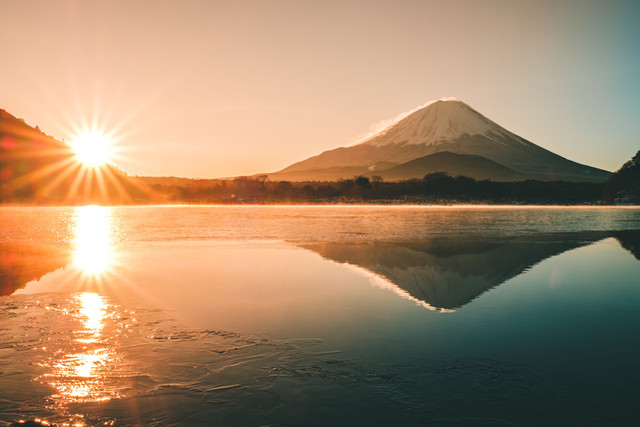 13. Practice Your Night Photography In Akihabara Or Shinjuku

It's easy to drop loads of yen in Akihabara, the arcade and anime hub of Japan. However, exploring Tokyo's "New City" and "Electric Town" by night (ideally, with a DSLR camera and tripod in hand or bag) is one of the best free things in Tokyo you can enjoy, even if you don't pay the big bucks to ride go-karts through the streets dressed as Nintendo characters.

In Shinjuku, the most iconic spots for photos are at the Ichibangai-dori gate in the Kabukicho red light district, and from the pedestrian bridge over Ome-Kaido Avenue halfway between Shinjuku and Nishi-Shinjuku stations. The best view of Akihabara, meanwhile, can be had by walking up to street level via Tokyo Metro Suehirocho Station's exit 2. 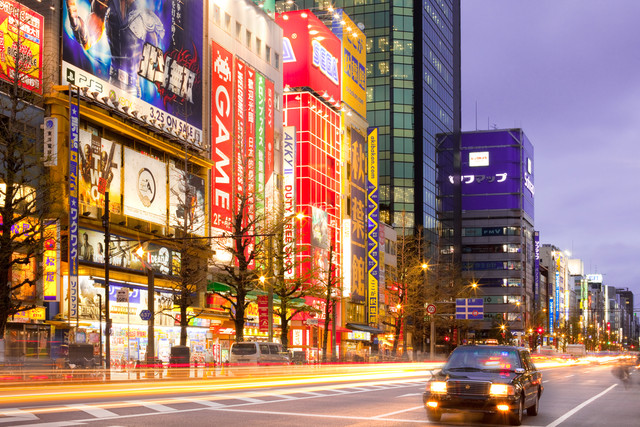 14. Walk Through Shibuya Scramble By Night

It's just not a trip to Tokyo without a walk through Shibuya Crossing (sometimes also known as the "Shibuya Scramble"), which is the world's busiest pedestrian crossing. This is also one of the top places in Tokyo to photograph (and to take selfies), which makes the fact that it's one of the free things to do in Tokyo all the more delightful.

Want to get a slightly different perspective on the crossing? Ascend to the platform of nearby JR Shibuya Station, or go up to the free observation of Magnet by Shibuya 109 department store, where you can take in an even higher panorama. 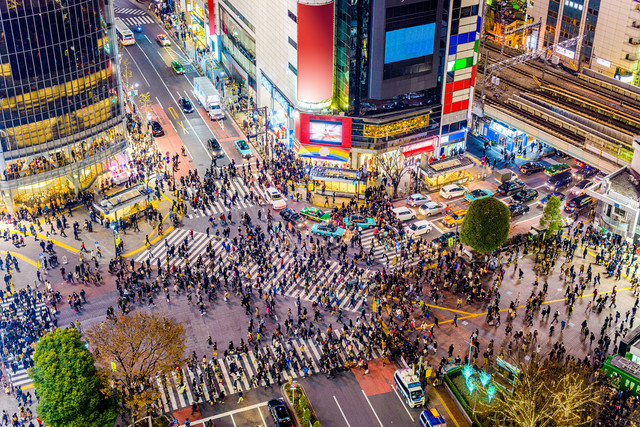 15. Watch Airplanes Take Off Before You Do

Irrespective of which Tokyo airport you leave from, Haneda (which is closer to Tokyo's city center) and Narita (which sits in nearby Chiba prefecture), both offer open-air observation decks to watch planes take off. Consider arriving at the airport a bit earlier than necessary if you want to enjoy this free Tokyo activity. (International flights generally board 30 minutes before departure in Japan, so arriving two or more hours in advance should afford you some good plane-spotting time, as well as time to clear security and immigration). 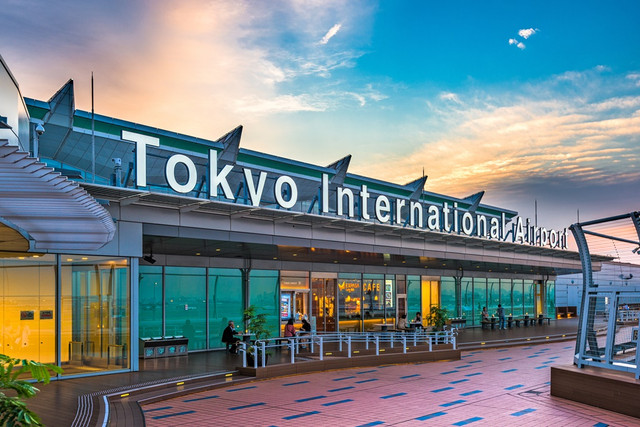