‘A Slice Of History’: Rare 1889 Tokaji Wine Up For Auction In July

Tokaji wine is revered around the world for its sweetness and ability to age effortlessly. But the two bottles of 1889 Tokaji Essencia, Zimmerman Lipot up for auction in July offer more than just a sweet drop to drink.

The Tokaji Blend describes the varietal composition of wines from Tokaj, Hungary. The first winemakers in the region, the Zimmerman family, created the region’s legendary sweet blend from their first growth vineyards in the 19th Century.

The Zimmermans had several vineyards across Tokaj and approximately 60 cellars. They lived in an elegant townhouse in Mád and had a second home in Abaújszántó. Their wines were prized throughout Europe, winning gold medals in Berlin in 1892 and Paris in 1896.

The Tokaj wine growers expanded their business with offices in Budapest, Berlin, Katowice, London and New York, until the occupation of Hungary by Germany in 1944.

Under the Nazi regime, 437,402 Hungarian Jews were deported to Auschwitz. The Zimmermans were among them. 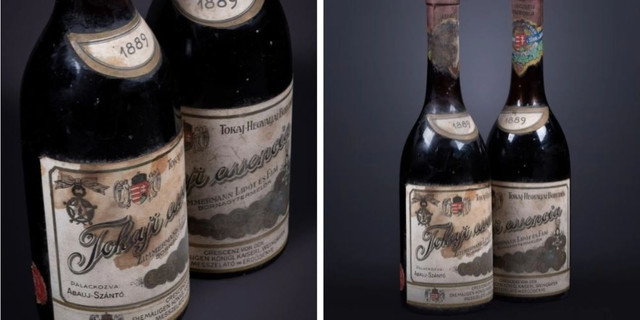 The Zimmerman’s carefully crafted Tokaji vineyards fell into disrepair as the war dragged on. Grapes rotted on the vines and weeds grew underfoot.

It wasn’t until 1990 that the first foreign investor realised the importance of the region. British wine writer Hugh Johnson purchased the land from more than 60 individuals to found the winery now known as Royal Tokaj.

Johnson’s Tokaj wine has firmly established itself as one of Hungary’s best labels.

One reads: “This was the home of Miklos and Blanka Zimmermann and their two children.” The two bottles of 1889 Tokaji Essencia, Zimmerman Lipot for sale at Dreweatts are exceptionally rare.

“One can almost distil the political history of Europe in the 19th and 20th century through Tokaji,” Mark Roberston, Head of the Wine department at Dreweatts said.

“The free-run juice of the aszu grapes can take 6 or 7 years to ferment fully to a maximum 3-7%,” Robertson said. “This supernatural concentration of sweetness is beautifully married with an unusual level of acidity creating a wine that can age effortlessly across the centuries.”

“These are important bottles and I hope they are enjoyed with a chink of the glass to the man and his family who made them”.

The rare Tokaji wine bottles have an estimated auction price of £500-£1,000 per 500 ml bottle and will be sold in two separate lots.