Disney Cruise Line's next ship will offer an industry first: a suite within a funnel, the Wish Tower Suite.

Set high in the forward funnel of the Disney Wish, the 1,966-square-foot penthouse will have a design inspired by the animated film "Moana." The ship and the suite will debut in the summer of 2022.

The suite will be Disney Cruise Line's most unique accommodation yet, the line said, and will be able to sleep up to eight guests in two main bedrooms. Accessible via a private elevator, the suite will have a children's room, a library that converts to a bedroom and four-and-a-half bathrooms. A living room will be flanked by an open dining area, a large pantry and a bar, all with views across the upper decks through a two-story window wall. 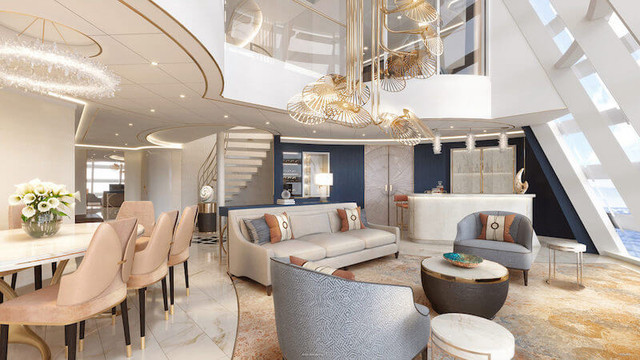 The main bedroom, on the upper-level loft, will have king beds, walk-in closets and floor-to-ceiling windows looking out over the living area. The main bathrooms will each have double vanities, soaking tubs and rain showers.

The Wish Tower Suite is being designed to evoke the Oceania-inspired world of "Moana," Disney said, with a blue, white and coral color palette, creative ornaments and custom artwork with nods to the characters and locales of the film, such as a custom canvas piece depicting Moana at sea; and bunk beds with a sparkling constellation pattern that lights up the ceiling with imagery from the movie composed entirely of stars.

A porcelain sculpture will change audio and lighting effects, with chimes recalling the film's soundtrack. The sculpture will reveal itself "as the heart of Te Fiti," Disney said, referring to an island in the movie, while its lighting and audio effects will fill the room "to provide a truly magical, one-of-a-kind greeting."

Tower Suite guests will be given a personal concierge team, curated experiences and a daily selection of treats. The suite includes a wet bar with water and sodas; complimentary internet; VIP access to the concierge lounge and a sun deck with whirlpools, a wading pool and a bar. 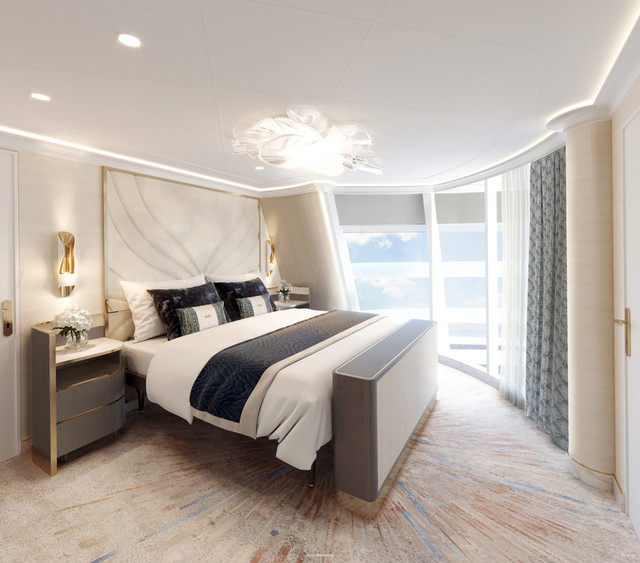 The Wish Tower Suite is the latest reveal for the next Disney ship, scheduled to debut in June 2022.

The line recently said that the ship would debut a host of new spaces and attractions, including the AquaMouse top-deck water ride, a Marvel Super Hero Academy and an adults-only "Star Wars"-themed bar.

Disney also said on Friday that 90% of the ship's 1,254 staterooms will have ocean views, and more than 900 rooms will connect to accommodate families.

The ship's June 9, 2022 maiden voyage will be followed by a season of three- and four-day cruises to Nassau and Disney's private island, Castaway Cay, from Port Canaveral, Fla.

Bookings open to the general public on May 27.