15 Of The Best Natural Hot Springs Around The World

Hot springs, where scalding water has bubbled up to the surface, are some of the most amazing natural wonders you can encounter. For centuries, these mineral-rich waters have either gathered naturally into pools or have been channeled into man-made spas, both options providing therapeutic and medicinal benefits—and some good old-fashioned relaxation. (Because who doesn't love a hot tub?) And while you may not be able to take a dip in some of these springs, they're still photogenic enough to get you hundreds of likes on Instagram. Here, 15 of the best hot springs around the world.

The 17 tiered pools of Pamukkale (“cotton castle” in Turkish) are as beautiful as hot springs get. The still, 94-degree Fahrenheit waters, contained in milky white travertine (a form of limestone) formations, perfectly reflect the cerulean Aegean sky and overlook the southwestern city of Denizli, about a six-hour drive south of Istanbul. Pamukkale is a UNESCO World Heritage Site, along with the nearby ancient spa town of Hierapolis, where various forms of hydrotherapy were once used in tandem with religious rituals. Take a dip in the nearby Cleopatra pool, also known as the Pamukkale Antique Pool; it’s said to have been a gift from Marc Antony to the pharaoh herself. 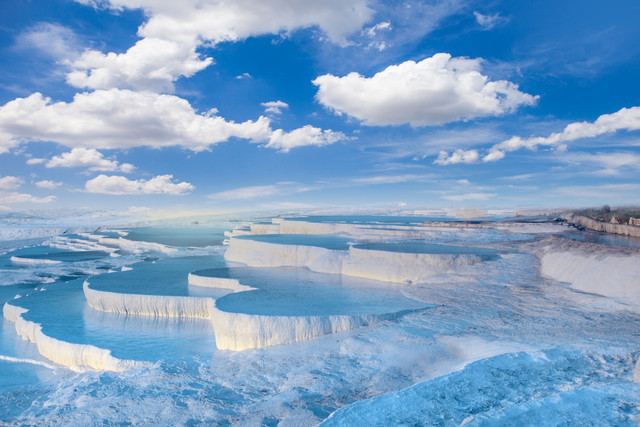 Starting from the village of Barsheni in India’s gorgeous Parvati Valley, it takes about four hours to hike up to these hot springs. But it’s well worth the effort to reach Khir Ganga—a meadow where Hindu god Shiva is said to have meditated for 3,000 years—especially when you get to immediately bathe in the pools and take in surrounding views of the Himalayas. There are two pools (one for men, one for women) at the springs, as well as a nearby Hindu temple dedicated to Shiva. 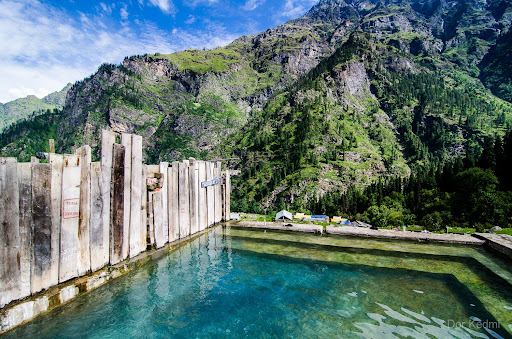 Grindavik’s Blue Lagoon, about a 50-minute drive from the capital of Reykjavik, is otherworldly in appearance—black lava rock punctuated with milky blue waters, and steam billowing like clouds. But the visual appeal is only part of the experience. A soak in the 100-degree waters (which come from the output of a nearby geothermal plant) is a spa-like experience all its own, with silica mud masks and mineral salts ensuring your skin will look and feel better than it did when you got there. You’ll need to pre-book a day visit, with ticket prices varying depending on time of day and the package selected (comfort, premium, and luxury). But there are also two hotels onsite where you can kick your feet up for a few days: the minimalist Silica Hotel and the über-luxe Retreat Hotel. 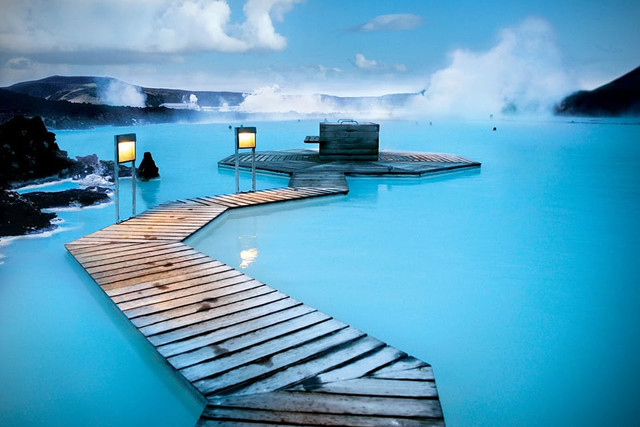 About 60 miles northeast of Fairbanks, Alaska, is where you’ll find Chena Hot Springs, a natural hot springs with its own resort. Discovered in 1905 by a pair of gold mining brothers, the hot springs are the main attraction. At the boulder-encircled lake, guests can soak in 106-degree Fahrenheit waters—and, if they’re lucky, catch a glimpse of the aurora borealis. The resort has plenty of other options for taking a dip, including indoor and outdoor tubs, hot tubs, and an indoor swimming pool, and doesn’t require visitors to spend the night to enjoy the springs. Bonus: the resort is also home to the Aurora Ice Museum (open year-round), crafted from over 1,000 tons of ice and snow, where you can sip an appletini at an ice bar. 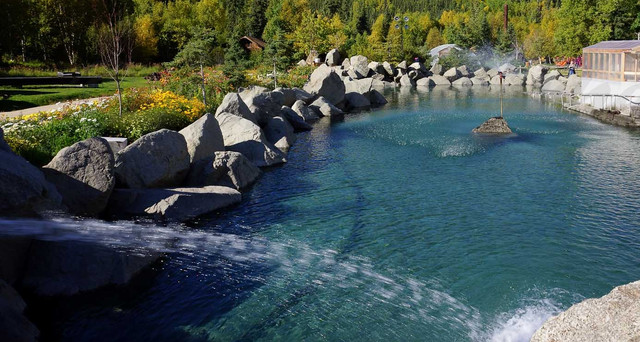 At about 370 feet wide and 120 feet deep, Grand Prismatic Spring is the largest hot spring in Yellowstone and the third largest in the entire world. The center of the pool is piercing blue (and, at about 188.6 degrees Fahrenheit, hot enough to be sterile), surrounded by rings of color ranging from green to orange—an effect produced by bacteria that thrive in the warm, mineral-rich waters. No swimming is allowed here, for obvious reasons, but it’s still the most photographed thermal feature in the national park. Spend the night at one of our favorite national park hotels: the Old Faithful Inn, just a 20-minute drive south of the spring. 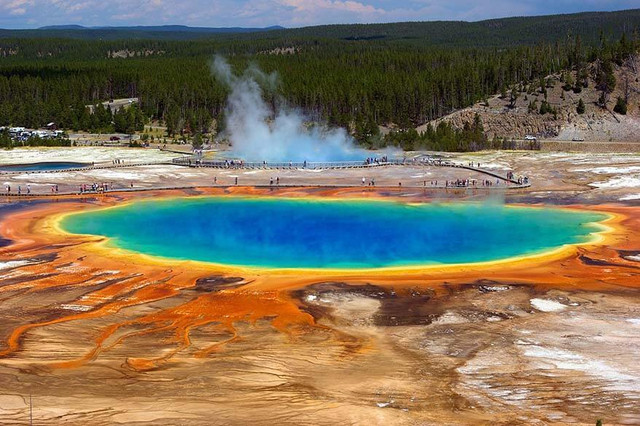 Deception Island is like a song of ice and fire, where an active submarine volcano has formed a caldera in the middle of Antarctica’s freezing South Shetland Islands. The island keeps its heat hidden below the surface, so visitors will often dig into the black sand beaches to feel the geothermal heat after taking a polar plunge in the sea. And while there are no “official” hot springs, there are thermal springs along the shoreline of Pendulum Cove that can reach temperatures of over 158 degrees Fahrenheit. When that water mixes with the cold ocean water, you have yourself a viable natural hot tub. (Note: Expedition guides will decide which water is safe enough, so wait for the experts to weigh in before you go splashing around.) You can reach the island via cruise—we recommend Norwegian Cruise Line’s 13-day trip on Norwegian Star, which starts in Buenos Aires, making a stop at Deception Island in its second week. 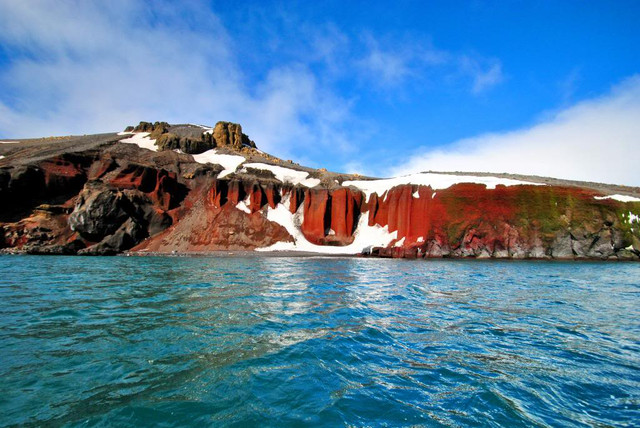 The entire Huanglong Valley, in the northwest of Sichuan province, is a UNESCO World Heritage site, known for its giant panda population, snowy mountains, travertine landscape, and hot springs. The terraced pools of crystal clear water stretch on for 2.2 miles—taken together, the formations are even thought to look like a huge dragon, snaking its way through the mountains—and an ancient Buddhist temple sits atop the valley. You can’t get in the electric blue waters, but you can view them from above, at the top of the valley, by walking up a paved path or via a short cable car ride. 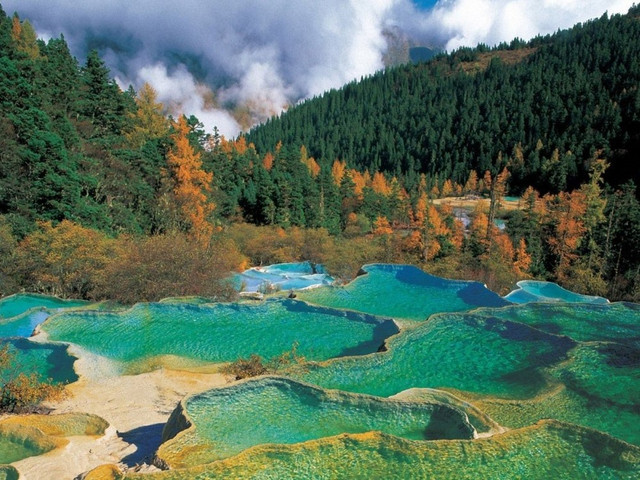 You know Bali for its rocking beach clubs, electric surf scene, and thick, verdant jungles—but it’s also home to another, lesser-known attraction: Banjar Hot Springs. Set in the island’s far northern reaches, less than a mile from the famed Brahma Vihara Arama Buddhist monastery, the hot spring is a destination unto itself, with a private pool and hot tub area, a spa that offers massages and body scrubs, and a 50-seat shaded outdoor restaurant that dishes out both Western and Indonesian fare. But it’s those healing waters you’re here for. With a 26 percent sulfur content that can help ease itchy, inflamed skin, and a temperature of about 100.4 degrees, the glossy green waters feed into three different pools: there’s a 6.5-foot-deep main swimming pool, a three-foot-deep children’s pool, ideal for bathing, and a pool with overhead spouts in the shape of dragons. 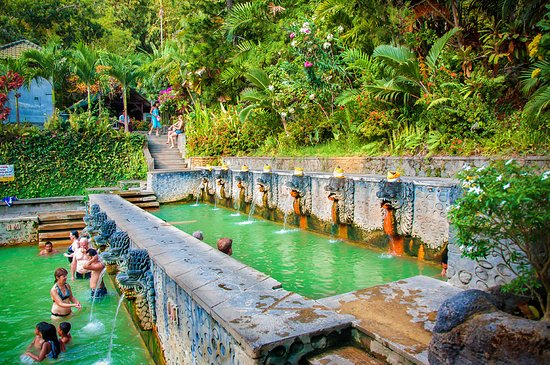 The Cascate del Mulino waterfalls and Terme di Saturnia thermal spa are a popular attraction in southern Tuscany. The falls flow onto travertine rocks, which have formed small pools over the centuries. The spring water—which sits at about 99 degrees Fahrenheit—is said to help alleviate everything from acne to tonsillitis. If you want to spend more than half a day experiencing the destination, we recommend penciling in a few nights at the eponymous onsite resort, which is also equipped with its own sprawling golf course and spa. 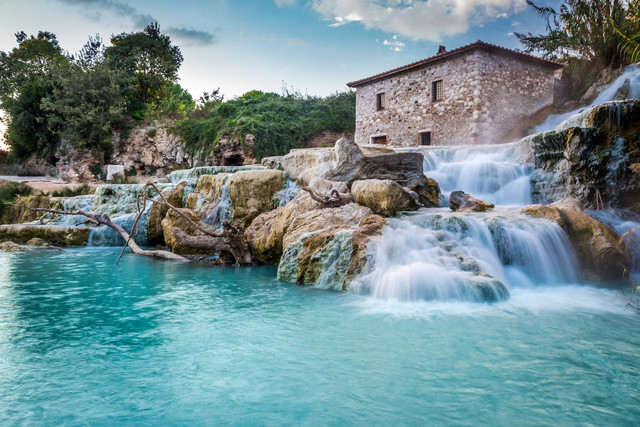 Hot springs are abundant in South Greenland, but the uninhabited island of Uunartoq is home to the only hot springs in the country that are warm enough to bathe in all year round. The waters range from 93 to 100 degrees Fahrenheit, even during the freezing months of winter, and the springs can be reached by boat from the mainland towns of Qaqortoq and Nanortalik. (You can get to the former via cruise; lines including Royal Caribbean manage itineraries that include stop here.) You won’t find yourself wanting for views, either, with breathtaking vistas of icebergs and mountain peaks all around the springs. 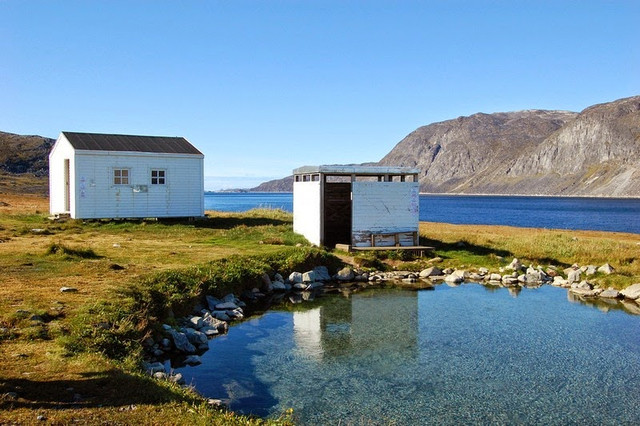 Japan is known for its onsens, or natural hot springs. One of the prettiest is located in the quaint town of Kurokawa on Kyushu, the southwesternmost of Japan’s main islands, where you can stay overnight or get a day pass to the springs with access to three of the 24 participating baths of your choice. For your dip, you can choose from pools located in caves, surrounded by bamboo, or situated next to snowy riverbanks, among others. (Notable ones nearby include those at Yamamizuki, overlooking the riverside just outside the town center, and Iyashi no Sato Kiyashiki, with its wooden tubs; both are also ryokans, where you can spend the night.) 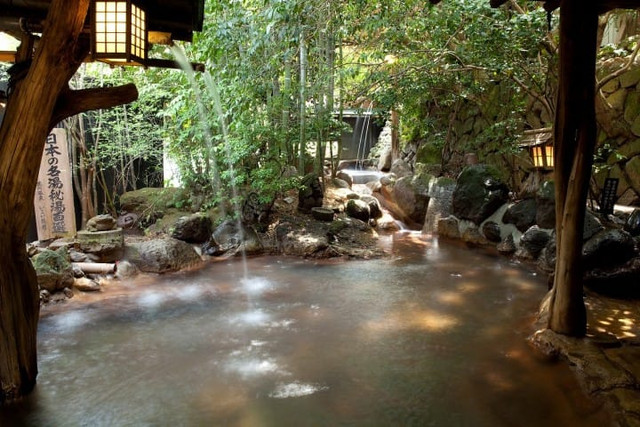 About a 20-minute drive from the Nevada border, California’s Travertine Hot Springs are completely swimmable and relatively easy to access from Highway 395—you’ll find them down a short dirt road—making them one of the most popular spots in the Eastern Sierras. The pools are formed by scalding geothermal water that trickles down travertine rock and algae, settling at a comfortable 103 to 105 degrees Fahrenheit. You may have to share your natural hot tub with other tourists, but the expansive views and epic sunsets are worth the potential crowds—especially if you start the day with a hike in the magnificent nearby mountains. 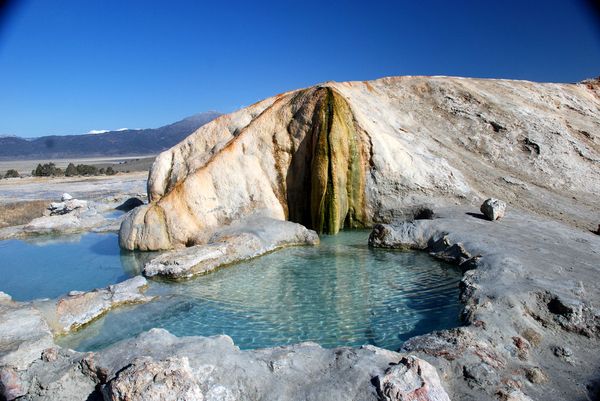 Champagne Pool is one of the most popular—and most colorful—attractions in Waiotapu, a geothermal area on New Zealand’s North Island. (Waiotapu is Māori for “sacred waters.”) The 213-foot-wide spring contains high amounts of carbon dioxide gas, which makes it bubble—not unlike, well, a flute of Champagne. It can reach temperatures of around 165 degrees Fahrenheit so you can't swim in it, but you can still enjoy the pool’s technicolor beauty, from its fluorescent, blue-green waters to its neon orange ring, a build-up of metalloid deposits. The pool is about a three-hour drive south of Auckland, making it a perfect weekend tack-on if you find yourself in Kiwi country. Be sure to stop by the other sites at the Waiotapu Thermal Wonderland, like boiling mud pools and the erupting Lady Knox Geyser. 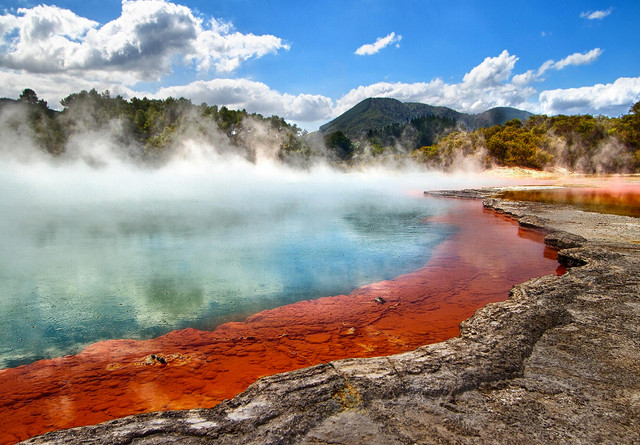 If you want to experience a hot spring while getting in a stay at an upscale hotel, Colorado’s Dunton Hot Springs might be just the place for you. The tony resort, located deep in the San Juan Mountains, makes up its very own log cabin–studded town, with a rustic charm that belies its first-class amenities (think, cross-country ski trails laid out by a former Olympic Nordic skier and world-class dining served in a saloon)—but it’s the namesake hot springs that have the greatest appeal. There are a few ways to enjoy their steamy waters, which range in temperature from 85 degrees to 106 degrees Fahrenheit, including inside a restored 19th-century bathhouse, in several different indoor and outdoor pools, or down at the source, itself. 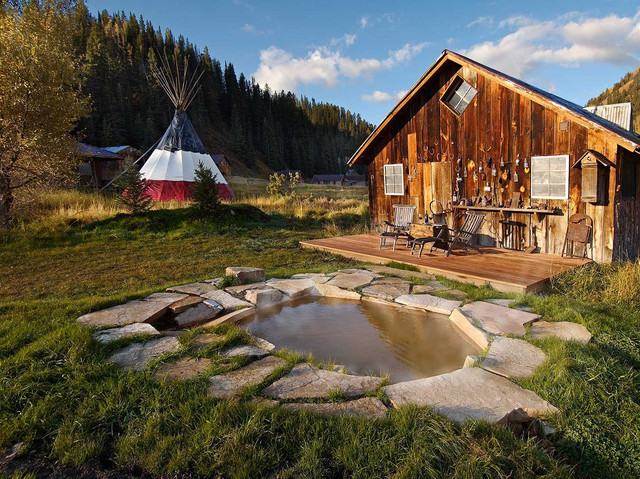 In the middle of Chile’s lush Villarrica National Park, this hot spring spa consists of 17 pools, a maze of red walkways, and cooling waterfalls. Each of the “baths” are fed directly from the area’s natural hot spring, with pool waters maintaining temperatures between 95 and 108 degrees Fahrenheit year-round (the waterfalls can plunge to about 43 degrees in the winter). Designed by Chilean architect Germán del Sol, the spa’s Japanese-inspired architecture and tropical environment make it a stunning place to soothe your muscles. There’s also an onsite restaurant, El Quicho, where you can fill up after your treatments with dishes like chicken fajitas and sweet pumpkin soup. 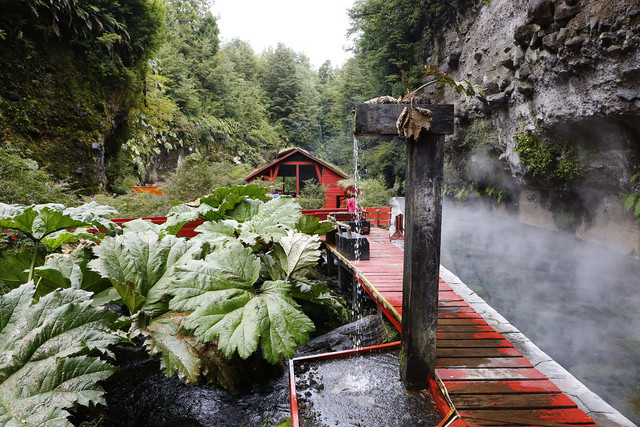