Eating fish sandwiches on Galata Bridge and haggling in the Grand Bazaar… most guide books will describe these as unmissable experiences. But there’s plenty more to Istanbul. Here is my guide to the perfect 24 hours in an incredible city!

First stop, get your bearings by heading to Konak Café. While most guides will tell you to climb Galata Tower for panoramic views of the city, a visit to Konak Café avoids the queues, ticket price and being surrounded by hundreds of other tourists! The panoramic view is clear and colourful… plus you can spend the money you saved on a traditional cup of Turkish coffee!

Wander past Galata Tower to Galata Bridge. Lined with fishermen, it feels like stepping back in time. At the end of the bridge, take in the incredible view of the New Mosque (Yeni Cami). Often surrounded by seagulls, it’s an impressive feat of architecture. Visiting here is one of the top things to do in Istanbul. 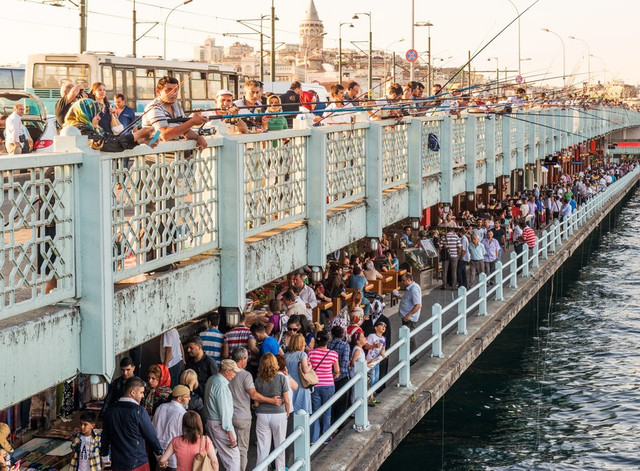 The guidebooks are right – no trip to Istanbul is complete without a trip to the Grand Bazaar and Spice Bazaar! They’re both located in the Sultanahmet region on this side of Galata Bridge. In the Spice Market, stock up on Turkish Delight, beautiful teas and of course spices. In the Grand Bazaar, show interest in buying a rug and you’ll be invited in for an apple tea and a chat! It’s all part of the Turkish hospitality. The Grand Bazaar welcomes around 250,000 people each day, and with 3000 shops is considered the largest mall in the world.

Off the beaten track, take a trip to Erten Konak. The wooden residence, constructed at the beginning of 20th Century is a small family run hotel. In the restaurant and garden area they serve delicious soups, salads, and more substantial dishes. More fascinating though, the hotel is fashioned as a traditional Ottoman residence. Going up stairs is like winding back the clock. In particular – there is an incredible array of costumes, wedding dresses and accessories, including a collection of 150 beautiful hats.

After lunch it’s time to work your way around the main cultural and historic spots in the city, with visits to the Hagia Sophia, Basilica Cistern and The Blue Mosque. They’re all within a few minutes of each other. But en route, be sure to wander along Turkistan Asevi to see the multi-coloured miniature houses. 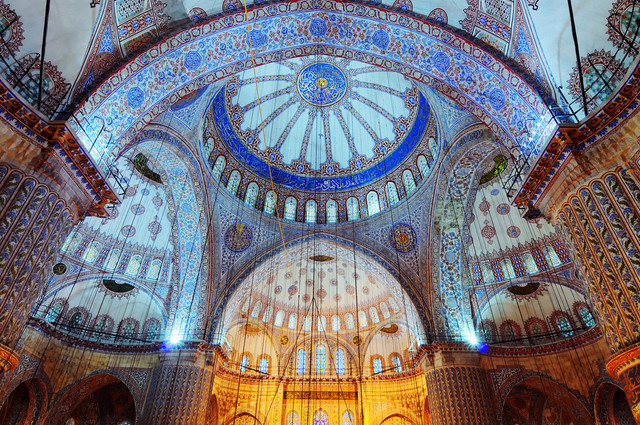 Istanbul A City Of Art

Hagia Sophia meaning Holy Wisdom, was a church from 540-1453. In 1453, Constantinople was conquered, and Sultan Mehmed II ordered the building to be converted into a mosque. Many symbols of Christianity were covered or removed, and Islamic features (including four minarets) were added. It was transformed into a museum in 1934. It’s interesting to note that the church was built to face Jerusalem, but when it became a mosque, they prayed at a slant so as to face Mecca.

James Bond fans will be familiar with the 6th Century Basilica Cistern – it featured in From Russia With Love. While a trip to an underground water filtration system might not sound appealing, I promise you it’s a magical place! 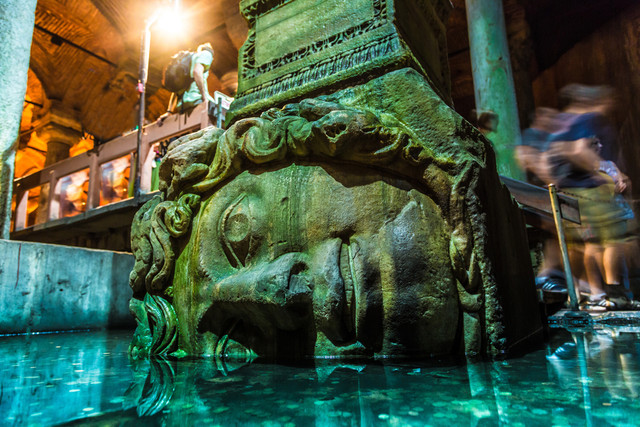 Istanbul is a city of mosques – 7000 in fact! But The Blue Mosque is the one you should definitely visit. It’s the only mosque in Turkey to have six towering minarets and is considered to be one of the world’s most beautiful. It gets its name from over 21,000 blue Iznik tiles that cover its interior. To enter you’ll need to remove your shoes and women must cover their heads with a scarf.

Next stop, Caferağa Medresesi – the school of traditional Turkish arts. Marvel at calligraphy and marbling demonstrations by the very talented Coskun Uzunkaya, and perhaps make a few purchases to take home.

£500 worth of paint has brightened up the steps linking the districts of Findikli and Cihangir. A few years ago a local painted some dull concrete steps rainbow colours! His motivation: “to make people smile.” The government repainted his work with a dull grey. But then, a few days later people took to the steps and painted them bright rainbow colours once again… and not only in Istanbul. The message spread, and soon rainbow steps were appearing across Turkey. Definitely stop by to see the heart-warming story first hand. Then, it’s definitely time for a little rest before getting ready for dinner. 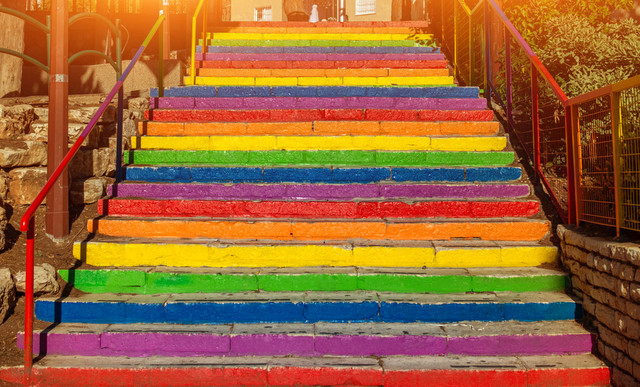 Tucked down a small street near Taksim Square Is Akcanlar. It’s usually packed to the rafters with a mix of locals and tourists. The menu is traditional – with lots of meze options and grilled kebabs cooked over the open grill. It’s the kind of restaurant you enter planning to have a light, healthy dinner, and end up ordering the full works! With Turkey being the no.1 producer of eggplant in the world, I’d highly recommend the barbecued lamb and eggplant kebab.

Next up, it’s time to sample the city’s legendary nightlife. Come day or night, Istikal Caddesi is always busy. Lined with large shops and street performers, this is the Times Square or Covent Garden of Istanbul. On each of the streets running perpendicular are bars and restaurants. The tables outside are great people watching spots, and some even have live music. Sample some Turkish beer (Efes), wine, or if you’re feeling brave, the national spirit raki!

With the night hotting up, wander through the Beyoglu neighbourhood to Nevizade. The narrow pedestrianised street is packed with Istanbul’s coolest bars, all with seating outside.

For more drinks, head to secret rooftop bar Asmaaltı. The small terrace has a great atmosphere and is always full of locals. Or, if you’re in the mood for a big night, make your way to Araf. Recommended by locals, the music varies from soul, funk and traditional sounds, to the latest club tunes. At the end of the night, flop into a taxi back to your hotel, and get ready to do it all over again! 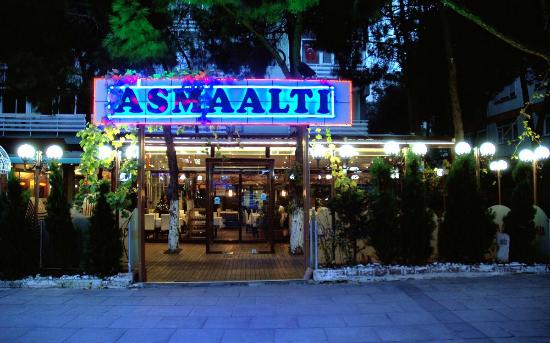